Is That in the Bible? 10 Common Sayings That Come from Scripture (and 5 That Don’t) 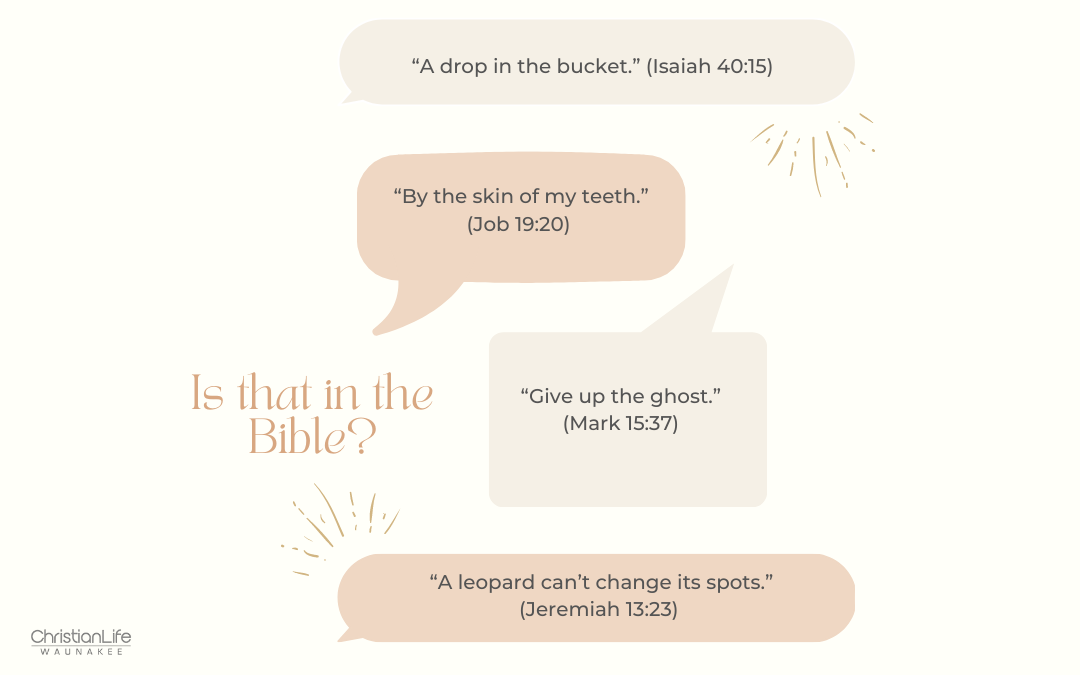 Few books have had as much impact on our language as the Bible. A lot of phrases, metaphors, and images English speakers use every day come from Scripture. Most people probably aren’t even aware of how much the Bible has influenced day-to-day speech in our culture. However, the opposite is also true. Sometimes common sayings are misattributed to the Bible when they’re not really in there. It can be surprisingly easy to mix up Scripture with not-Scripture. So, to test your knowledge, here are 10 sayings you may not have realized are from the Bible and 5 many people mistakenly believe are Biblical but aren’t.

Well-Known Sayings That Are from the Bible

A small or insignificant amount in something larger. Isaiah 40:15 says that, to God, “the nations are like a drop in a bucket” (NIV).

To narrowly avoid or accomplish something. Job says he escaped death “only by the skin of my teeth” (NIV).

To die. This phrase is an old idiom that seems to have originated with the King James Bible. Newer translations like the NIV no longer use this phrase. For example, the KJV says Jesus “gave up the ghost” in Mark 15:37, while the NIV simply says He “breathed His last.”

Unable to change something about one’s nature. Jeremiah’s point is that those accustomed to doing evil cannot do good any more than a leopard can change that fact that it has spots.

Usually used today when a child says something unexpectedly wise or insightful. This phrase also comes from the King James Version, although variations on the same meaning are found in other Bible translations too.

The authorities or those in control of something. Romans says these powers are ordained by God.

This Biblical phrase from 1 Timothy (NIV) is often mistaken for “money is the root of all evil,” which has a different meaning entirely.

To claim that something (usually something bad that’s happened or is about to happen) is not your responsibility. Pilate washed his hands with water in front of the crowd that was calling for Jesus’ death. He didn’t believe Jesus deserved to die but gave in to pressure from the people. Pilate didn’t want to be held accountable for an innocent death, symbolically washing his hands clean of the whole thing.

Signs that something bad is about to happen. This phrase comes from a story in the Old Testament. When King Belshazzar held a feast using goblets taken from the Jerusalem temple and praised false gods for them, a disembodied human hand appeared, terrifying everyone, and wrote a message on the wall foretelling the end of Belshazzar’s kingdom.

To do what’s right or to work hard for a good cause. Paul used this metaphor when writing to the younger pastor Timothy telling him to “fight the good fight of the faith” (NIV). The saying is now popular in a lot of contexts.

“God helps those who help themselves.”

Although often quoted as Scripture, this pithy saying isn’t in the Bible, or consistent with it if you ask me. It was really coined by Benjamin Franklin in Poor Richard’s Almanac.

Although passages like Isaiah 55:8 support that God’s ways may be mysterious to us, this actual phrase may originate with an 18th century hymn by English poet William Cowper.

“Cleanliness is next to godliness.”

This phrase is often attributed to theologian and preacher John Wesley, although the concept of hygiene being connected with morality predates his sermons.

“Neither a borrower nor a lender be.”

This sounds like it could be from Proverbs, but it’s actually from William Shakespeare’s play, Hamlet. The character Polonius, counselor to Hamlet’s uncle the king, gives this and other pieces of advice to his son Laertes.

“This too shall pass.”

Sounds like something from Ecclesiastes doesn’t it? It’s nowhere in the Bible, but the actual origins aren’t clear. It may be from Jewish folklore or a Persian fable. The saying was made popular by Abraham Lincoln and now is commonly mistaken for scripture.

Because phrases like these permeate our culture, it’s especially important for Christians to study our Bible and know it well. That way, we’ll be able to discern when someone is quoting Scripture and when they’re not, as well as debunk common misunderstandings and fill in missing context for those with a passing knowledge. The Bible is a powerful too, and by diligently studying it, we can avoid misquoting and communicate what it says accurately.

Author Hannah Rau is a Michigan-based writer and writing tutor. Hannah earned degrees in English and rhetoric and minored in Bible. She enjoys exploring literature, media, and culture through the lens of her Christian faith. And drinking coffee. Lots of coffee.