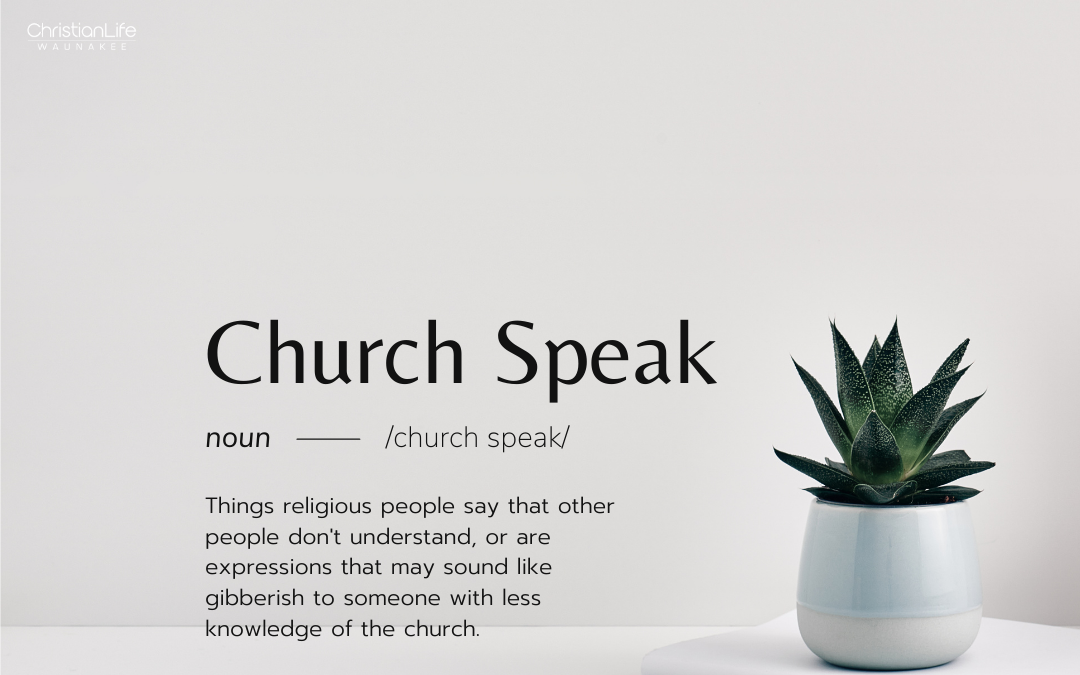 I recently saw on Facebook an ad for a church leadership conference. According to the ad, the goals for the conference included, among other things, promoting “relationships that enhance Kingdom growth” and, more alarmingly, “setting the church on fire.” As someone who grew up in church, went to a Christian university, and writes a faith-based blog, I have a vague idea of what they meant (I’m still pretty confused, though). This wording may not have been the most effective way for the conference organizers to communicate with their audience. It also made me wonder whether we sometimes scare people as Christians when we talk about setting things “on fire for Jesus,” sing about fountains “filled with blood,” etc.

Especially around a major holiday like Easter and with so much chaos in the world, many people may ask you about what you believe. Sometimes, though, we Christians have a hard time explaining our faith using words that are easy for others to understand. We tend to use “Christian-ese” language, also known as “Church speak.” These terms describe words that are either specific to Christian churches or aren’t used widely outside of the church or by the non-religious. In other words, these are terms and expressions that Christians use to talk with each other, but that may sound like gibberish to someone with less knowledge of the church. I’m often guilty of this myself, and you may catch me using “churchy” language in my writing at times. The meaning of words that we grew up with or use every day may not be obvious to everyone. For example, what about sin? This is a fundamental concept for Christians, but those who aren’t religious aren’t likely to use this word in daily life. Our language is full of other niche words like propitiation, covenant, incarnation, conversion, apologetics, tribulations, sanctification, etc. The meaning of some of these words may be obvious to us but incomprehensible to others. Many of our other everyday expressions may be equally murky. For example, what does it mean to “produce fruit,” “quench the Spirit,” or be “washed in the blood”? Many of these words are useful and precise but may need to be explained to many.

Now, lots of groups use jargon, and there’s nothing wrong with that. Jargon often acts as a kind of verbal shorthand among people within a specific group. For example, people within a particular industry talk to each other using certain words that may be unfamiliar to others. People who share similar interests, whether that’s a specific type of literature, sports, games, movies, etc., also use unique expressions and terms to communicate efficiently with others in the group. By definition, jargon identifies those within a group and excludes those outside it, which can be good and bad. On one hand, it helps us distill complex concepts into words that are packed with meaning for a certain group. On the other hand, if you’re not “in” on the group’s jargon, you’re going to need help understanding the words they use.

This isn’t just an academic problem or one that results in silly or mildly frustrating misunderstandings. When eternal life and death are on the line, clear communication is vital. To effectively witness for Christ, we need to be able to explain what salvation is in a way that anyone can understand. If we tell unbelievers that they need to be “saved from their sins,” will they know what we mean? Likewise, do we think about how confusing it might sound to invite a newcomer to “ask Jesus into their heart” or “make a decision for Christ”? Even Nicodemus in the Bible was flabbergasted when Jesus told him he must be “born again”: “’How can someone be born when they are old?’ Nicodemus asked. ‘Surely they cannot enter a second time into their mother’s womb to be born!’” (John 3:4, NIV). Jesus had to explain further to make sure Nicodemus didn’t continue to misunderstand. All of this isn’t to say we should never use jargon or Bible-specific language. But we should be aware of how confusing it can sound so that we can explain or reword it when needed.

If you are more comfortable with church speak and Christian jargon, remember that not everyone is. As well as making us better communicators, being able to explain tricky concepts in simple terms is helpful to check that we really understand what we’re talking about. On the other hand, maybe you’re new to or unfamiliar with a lot of church-y jargon or just don’t use it that much. Don’t be afraid to ask for clarification. The person using the jargon may not even recognize that they’re doing so because the words are so familiar to them. Discussing how words are being used is useful even for those in the same group who share jargon, ensuring both are on the same page with what’s being discussed.

As Christians, we need to be able to recognize the jargon we use and how it might be difficult for others to understand. To reach the widest audience, maybe the best way is to use simple terms, avoiding jargon as much as possible. Or, at least we need to check that our audience comprehends us and clarify jargon-y terms in a way that makes sense. This way, we can avoid potential misunderstandings about setting things on fire and such.

Author Hannah Rau is a Michigan-based writer and writing tutor. Hannah earned degrees in English and rhetoric and minored in Bible. She enjoys exploring literature, media, and culture through the lens of her Christian faith. And drinking coffee. Lots of coffee.